Before I started listening to classical music on the radio, I’d never heard of Charles-Camille Saint-Saëns. I think most people probably don’t know who he was, which is a shame, considering he was a very remarkable composer and musician. I mean, most people know who Beethoven and Mozart were, even if they don’t like or don’t listen to classical music.

I was actually going to publish this post last week, but when I was doing some reading about him, I learnt that his birthday is actually today, so I thought that today would be better. I also learnt that he was a bit of an over-achiever, and was performing concerts by the time he was ten years old. He was also a genius of sight-reading music, and could play the most complicated pieces at first sight (something I could only dream of doing).

Saint-Saëns apparently started composing music around the age of six, but I think his best work (that I have heard so far) was one he completed in his early fifties. Saint-Saëns’ Symphony No. 3 — also known as the “Organ Symphony” — is also one of my favourite pieces of classical music, and almost always catches my attention when it’s played on the radio (provided I’m not too absorbed in some task).

I actually never thought the sound of the organ was particularly pleasant, but I think this symphony would not be as good any other way. Perhaps the problem was that I’d only ever heard the organ on its own, not together with and amongst other instruments.

To me, the Organ Symphony sounds majestic, regal and uplifting, and is something I never get sick of hearing. The first few times I heard it, I thought it sounded like something from a movie — maybe Lord of the Rings or something epic like that. But there’s a certain part of the symphony that’s very distinct, and I realised it is actually used in Babe, that delightful movie about a pig who becomes a sheepdog (or sheep-pig), which you might consider epic in its own way.

If you have time, I think it’s worth a listen. If nothing else, it makes for excellent background music.

Last Friday, I went out to buy new running shoes. The reason I needed new running shoes warrants a post of its own, so I’ll leave that for another time. Anyway, as I was already out, I figured I’d stop by at the Lifeline Bookfest. I’d gone the week-end before with a friend, but hadn’t found anything I wanted, so I left empty-handed. This was kind of to make up for that, and I was sure I’d find something.

After much wandering, I found a Russian for Dummies book, which will hopefully be a good introduction to Russian whenever I decide I’m finished with learning Persian and want to move on to Russian; and I also found a decent copy of The Hobbit, which I bought because I’ve been wanting to re-read the Lord of the Rings trilogy for ages, and had started Fellowship of the Ring earlier this year, but stopped after a few pages because I thought I really should re-read The Hobbit first. END_OF_DOCUMENT_TOKEN_TO_BE_REPLACED

A few weeks ago, I was at a friend’s place with a few other friends. After lunch, it was somehow decided that we should watch a horror movie. I think the rationale was that it was broad daylight, and we were in good company, so any horror film was likely to be more tolerable (compared to watching one in other circumstances). A particular friend in the group also seems quite interested in this genre (JS!) END_OF_DOCUMENT_TOKEN_TO_BE_REPLACED

It’s not even December yet, and the major TV networks have started broadcasting Christmas-themed shows and movies. Well, to be fair, it probably starts – at least – by about this time every year. The shopping malls, etc all had their Christmas decorations up weeks ago, so I suppose TV isn’t really the first to the party anyway.

I only had a half-day at work yesterday, finishing up at midday. I stayed back to have lunch, and went down to the cafeteria to put up more posters for The Compliment Project. I was quite chuffed to see that, of the two I’d put up on Monday, one had had all the tags taken (or I assume so, anyway, since the poster itself was no longer there) and the other had most of the tags taken. There’s also been a good response at my pharmacy (I’d put one up in the staff tearoom) but the one I’m most pleased with is the one I put on my local community noticeboard:  END_OF_DOCUMENT_TOKEN_TO_BE_REPLACED

I have this kind of vague, kind of vivid memory about a conversation I had with a friend back in high school. I think it was the last day of grade 8, or the last day of semester in grade 8 or 9; and I remember this because there weren’t really any classes or, at least, we weren’t doing any learning. Instead, in one class, we watched a movie – something sad and poignant like The Notebook but not that.

In this particular conversation, this friend and I (and perhaps a few other friends who were around) were talking about movies that make you cry. The Notebook was one of her suggestions. As for myself, I’d never been moved to tears by a movie. Some time after this, I got around to watching The Notebook, and I didn’t cry. Don’t think I even felt tears welling up in my eyes. I appreciate the beauty of the story and all, and I’m sure I would’ve felt the emotion of the characters, but… no tears.

END_OF_DOCUMENT_TOKEN_TO_BE_REPLACED

When ‘Atonement’ first came out in cinemas at the end of 2007, I went to watch it with a few friends. If I remember correctly, it was New Year’s Eve, and we watched it some time in the afternoon before heading over to South Bank to secure a good fireworks-viewing position. I don’t recall knowing anything about it before watching it, but I remember that I actually really, really liked it. In fact, I probably liked it the most out of all the friends I went to watch it with.

The following year, I had a uni placement out in Cleveland. One day, I arrived early so that I could explore around before heading over to my assigned pharmacy. Unsurprisingly, I ended up in the local library, and it was lucky I did because they were selling off some of their old books. Usually I don’t expect to find anything good in these sorts of sales because they usually just get rid of random old books that no one reads (or has ever heard of), or books that are just about falling apart. I had a look on my way out, and I cannot tell you how delighted I was to find a copy of ‘Atonement’ (by Ian McEwan) among the sale trolleys! And it was in pretty good nick, and was only 50 cents! What good fortune! 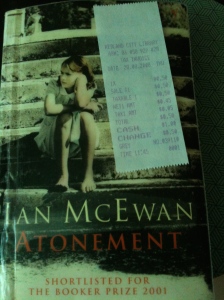 I didn’t think twice about buying it, but it has since sat on my shelf for seven years before I finally decided to read it. Well, to be honest, I did pick it up a few years ago, but I mustn’t have been in the right mindset for it, or I must have just finished some epically draining novel, so I just didn’t have the mental energy to read it, and just put it down after a few pages.

I was prompted to read it by the same friend who had lent me her copy of ‘The Narrow Road to the Deep North’. I suppose there are some similarities (themes of war, suffering, relationships, etc) but they are still such different books. Both amazingly well-written though!

‘Atonement’ is one of those books where you have a lot of moments when things just click – when the puzzle pieces fall into place and it’s like a lightbulb has gone off. I had wanted to leave enough space between watching the movie and reading the book so that the former didn’t influence the latter too much, but hadn’t expected to have forgotten so much. Nor had I expected to remember as much as I did. There were parts that certainly sounded or felt familiar, and others that I could not remember at all from the movie (and I’m not talking about small details, but about huge chunks, like the entire part about Robbie going to war).

As soon as I’d finished reading the novel, I decided to re-watch the movie (which I haven’t seen since that NYE all those years ago) so that I could wallow further in the sadness of the story. And what a journey this story has taken me on! Watching it now, almost eight years on, I wonder if I really understood everything that happened in the movie when I first watched it. I mean, I’d just finished high school – there was a lot about the world I was yet to learn.

Watching the movie so close to finishing the novel also made all the omissions so much more glaringly obvious. Really, it just reinforced the reasons why I read: you can get so much more out of a book than a movie. It must be such a challenge for film-makers to adapt books into movies and try to maintain all the feeling and tension and history, let alone trying to decide which scenes will and won’t make the cut.

To describe ‘Atonement’ in a word, I’d probably call it “heart-breaking” (that still counts as one word because it’s hyphenated) or maybe “devastating”. Perhaps “devastatingly beautiful” if you allow me two words.