For all the time I spent browsing Google Maps before our trip, we ended up finding a lot of things by chance. To be fair, I browsed maps mostly out of general interest, and to give myself a broad sense of the orientation of things, not to memorise routes and landmarks. With a memory like mine, that’d never work anyway. And, as it turned out, I was usually too absorbed in my surroundings to even care which way was north.

Anyway, on our first day in Tokyo, we didn’t really have a plan. We basically picked a random street, and started walking. I reckon Tokyo is good like that: you don’t need a plan. Sure, you might miss out on certain things if you don’t schedule your day with meticulous detail, but the place is so huge, you’re going to “miss out” on something regardless.  And sometimes it’s satisfying enough to just wander and take in the sights – even the seemingly mundane sights.

I don’t know what sort of business this door leads into (don’t know enough Kanji to read the entire sign, sorry) but I noticed this on a little side street, and it became my first Japanese door photo. Little did I know at the time that we’d find doors of this style (simple, brown, metal frame, glass panes) all throughout Japan (particularly in Kyoto, if I remember correctly)

We hadn’t walked very far from our hotel (or, at least, it didn’t feel like very far) before we started seeing signs pointing toward Yoyogi Park. And here is where my map browsing and other research made itself useful because I recognised that name, and suddenly we had a destination.

Somewhere within the grounds of this massive park is the Meiji Shrine (Meiji Jingu), which was completed in 1920, and is dedicated to the spirits of Emperor Meiji and Empress Shoken (their actual graves/tombs are in Kyoto, the original capital of Japan). The shrine probably features on every list of “must-see places in Tokyo” ever made …and who am I to argue? 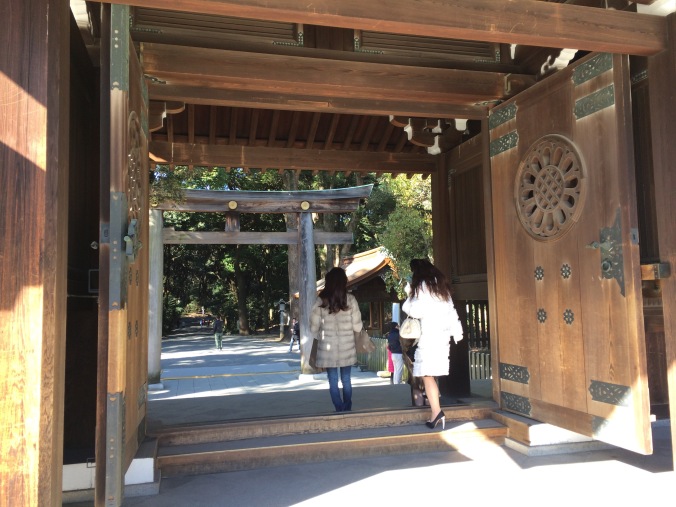 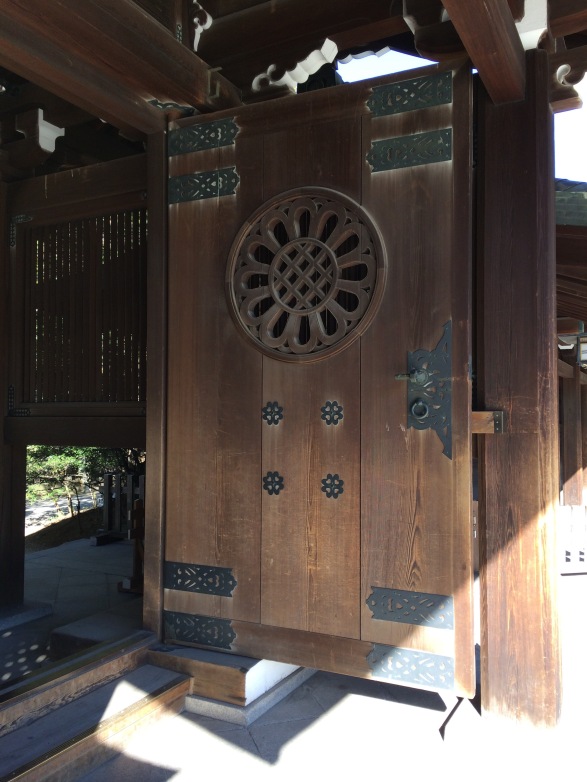 Here’s a close up of the door (to be honest, I really only included the photo above to give an idea of scale. In this photo it could be a normal-sized door)

For one, the doors are magnificent. I’d been told by a friend that you’re not supposed to take photos of shrines, and I’d read something similar beforehand, so it’s a good thing there was plenty of other things to photograph!

Granted, Yoyogi Park and the Meiji Shrine are really popular with tourists (and just popular in general, I guess) so there are a lot of people around – not enough that it feels crowded or anything (the whole place is seriously massive) but enough that sometimes you have to wait a bit to take a photo void of people… But that was fine. We weren’t in a hurry.

We also took a stroll around the gardens and Yoyogi Park, itself, but I won’t bombard you with photos of all that. The whole place is very well maintained and, even in winter, it was beautiful and serene. Mostly I’m just impressed by the fact that this gigantic green-space exists in the middle of such a massive, bustling city.

Maybe it’s this juxtaposition (against the teeming streets and buildings that surround it) that really enhances the feeling of serenity. Actually, one of my favourite things to do on the trains was stare out the window, and spot all the little shrines dotted amongst the sky-scrapers and big apartment buildings. For some reason, it just really made me smile – sort of like when you witness small acts of kindness that restore your faith in humanity a little.

Thursday Doors is run by Norm 2.0. Please visit his site to find links to other participating blogs (or to add yours to the list if you want to join in!)