There are no direct flights from Brisbane to Sapporo. We would’ve had to transfer somewhere (Tokyo/Osaka or somewhere else in Asia), and, from what I remember, that usually involved an overnight wait, so I made the executive decision to stop in Tokyo for a couple of nights before heading north to Hokkaido.

I was also heeding advice from James of James Proclaims to not book early morning flights because no one needs that. Most of the connecting flights to Sapporo would’ve been at, like, 5am, after arriving in the transfer airport the night before. I took one look at those search results and closed the browser tab.

Unfortunately, there are also no direct flights between Brisbane and Tokyo (unless you want to fly Qantas and pay a lot more). We could’ve gone direct from the Gold Coast to Tokyo or Osaka, but this would’ve meant driving down to the GC airport at 4am or earlier, and that just sounded like a bad idea (see above paragraph).

So we left from Brisbane Airport at the reasonably ok time of 7am (thankfully KF lives near the airport, and the first leg was a domestic flight, so we didn’t have to get up too early (we did anyway – I just couldn’t sleep out of sheer excitement)), transferred in Cairns, and arrived in Tokyo’s Narita Airport before 7pm that night. Easy.

Travel tip: We would be in Japan for just over two weeks, so rather than activate our JR Rail Pass on the first night (on which we’d only need to make one trip – from Narita to Shinjuku), we waited until the next day. (NB: The JR Pass is available in weekly increments, not daily. It must be bought outside of Japan, but activated after arrival.) This also meant that we didn’t have to wait around at the JR office at the airport along with every other tourist who was on our plane, but instead went straight to Tokyo, and had our passes activated hassle-free at the Shinjuku office the next morning by a very pleasant lady (who also spoke good English). (Setting the activation date as the next day was my idea, but actually activating it the next day, at Shinjuku, was my sister’s idea. Full credit to her.)

Back to the important stuff…

I still remember stepping off the plane, feeling the cold for the first time, and, later, walking through the streets from the train station to our hotel, starting to shiver (there will be another post later about good ol’ Shinjuku Station, and the train network). Couldn’t wipe the smile off my face. It was gloriously cold!

Lots of pretty lights all over Japan. This is in Shinjuku Station somewhere – part of their “Winter Illumination”. I actually took this photo during our second Tokyo stay, but I thought this post needed more pictures (and I was too overwhelmed to take many photos on that first night)

Once we’d found our hotel, we dropped off our things, and went in search of dinner. Didn’t take us long to find a nice little ramen place, still almost full of people at 9pm. I hadn’t researched any food places to eat at precisely because I just wanted to wander around and walk into any place that looked good – little places exactly like this one.

Japan has this great meal ticket system used in some restaurants, including the one in which we had our first dinner. I reckon we should adopt it here. Basically, you select what you want to order at this vending machine, pay for it, and the machine gives you a ticket with your order. Hand this to the friendly staff, take a seat, and your food is served in no time.

There was no English on this machine, but each option was thoughtfully accompanied by a small picture, and that’s really all you need. We watched a couple of other patrons purchase their tickets, then did likewise. It was easy. Possibly the best ramen we had in the trip, but also possibly because we were cold and hungry. Sadly, I don’t know the name of the place, or remember exactly where it is, but, like my sister says, you can go pretty much anywhere in Japan and the food will be good (or at least better than Japanese food outside of Japan). 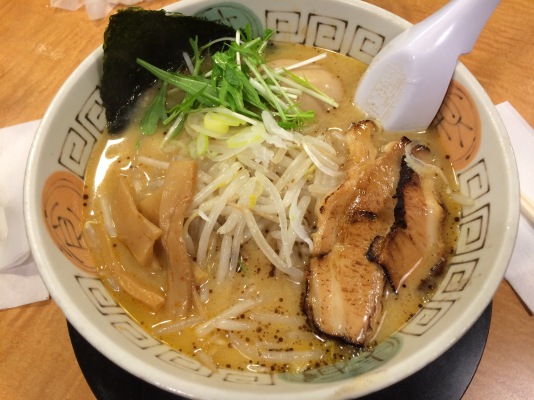 After dinner, we sort of just wandered around and took in the sights. Since I’d brushed up on my Japanese a bit, I took particular joy in reading all of the signs of all of the places we walked past, went into, or viewed from a distance (I actually did this throughout the entire trip). I’m not good with Kanji, but any Hiragana and Katakana always caught my attention (especially Katakana, which is the alphabet they use for words borrowed from other languages).

Travel tip: It is definitely possible to get by without knowing any Japanese (as I was told from friends who’d been before), particularly with things like Google Translate, and the fact that most menus have pictures or English translations, but most Japanese people seemed to appreciate (and sometimes even get excited) when I (tried to) speak Japanese to them. (Bonus tip: if you do this, it’s probably good to learn how to say you only know a little bit of Japanese (or whatever level you know). I did use this a few times. They were pleased nonetheless at my efforts, which was both gratifying and encouraging.)