So… I’ve been asked to post the recipe for the Frangelico cake that featured in the last post. I think I didn’t include it in that post originally because I’d just taken a recipe that I found off Google. But I suppose I kind of tweaked it enough to be able to kind of post it as kind of an original recipe. (I only just realised, as I was proofreading this, that I wrote “kind of” so many times in that one sentence… Totally wasn’t intentional.)

The original recipe was sourced from All Recipes Australia, courtesy of someone called “kate” who apparently also lives in Queensland. Thanks “kate” (you’ll probably never read this, but thanks all the same).

I also made a simple cream cheese frosting to spread on top of the cake. This basically just involved beating together 250g of cream cheese, 1/3 cup of icing sugar, some hazelnut syrup and, yes, more Frangelico (I’m not an alcoholic, I swear – it was just a splash).

The cake turned out kind of fudge-y, which is perfectly fine. I added the chia seeds on a whim in an attempt to make the cake remotely healthy-ish (almonds are good too, right? Vitamin E and whatnot). At the very least, I didn’t expect it to affect the actual taste very much. Fortuitously, this addition seems to have added a nice bit of texture to the cake. Maybe next time I’ll try it with chopped hazelnuts or something, or make it with a different liqueur and add fruit. Maybe Chambord…?

Well, I hadn’t given too much thought to the end product when I was making it; I just hoped it would be an edible and reasonably tastey cake. Mission accomplished, I suppose, if I do say so myself. Also, my sister liked it, which was the whole point of the exercise, anyway. 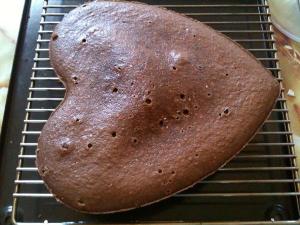 5 thoughts on “the baking of the cake”